- the New Black in Crypto and DeFi?
Blockchain technology is trending, and the number of blockchain-related projects is on the rise. The blockchain space has come a long way as it is playing a crucial role in many industries today. At the same time, the need to interconnect various blockchain platforms is also becoming a necessity as the number of users is growing rapidly.

Every blockchain platform is different from one another when it comes to transaction & data processing capabilities. Things become even more complicated when we get a bit deeper, as many blockchains cater to specific audiences and use cases. For instance, Ethereum is best for financial applications, whereas VeChainThor is known for its suitability in supply chain projects. With cross-chain functionality, any supply chain application can interact with financial applications built on the Ethereum blockchain.

Cross-chain solutions are all the rage these days in the world of DeFi and crypto space as a whole.

So, when exactly did the industry realize the need for cross-chain technology? Many would point fingers at Ethereum's infamous scalability issues. They won't be wrong in it. After all, Ethereum's scalability issue has led to its users complaining about very high gas fees. Many Ethereum users have complained about shelling out hundreds of dollars worth of gas fees in recent times.

But the use of cross-chain technology isn't limited to solving the scalability woes of Ethereum alone. It is much much more than that. Cross-chain projects will continue to rule the roost for a long time and not because of solving Ethereum's scalability issues alone. Not by a long shot. It has potential beyond that. Though, the growing clout of DeFi is definitely one of the reasons behind the increasing demand for cross-chain technology.

From mere $1 billion in total value locked (TVL) in February 2020 to $100 billion TVL in April 2021 shows the astounding growth of decentralized finance. Considering this, interoperability between separate chains is becoming even more crucial day by day.

The success of the entire decentralized finance space may depend on the execution of cross-chain functionality between different blockchains. If we can pull it off, it will set off a new chapter in the history of cryptocurrencies. In fact, it may lead to an upsurge in the number of users and make DeFi a worthy contender to the traditional financial space.

A cross-chain solution will enable a user to make transactions between different blockchains, which will revolutionize the entire blockchain industry. These projects will be the heart of the entire digital economy of the future. There is one more benefit that we will see concerning cross-chain solutions, and that is multi-token transactions. It will be the courtesy of multi-token wallets that are gaining popularity in recent times. Using these multi-token wallets, users will only have to maintain a single token to store and transfer tokens across blockchain networks with ease.

Another benefit of cross-chain solutions is that they will enable users to share information between multiple blockchain networks. For instance, if a user sends some information from Blockchain Network X to Blockchain Network Y, within a cross-chain solution, the recipient can easily read the message sent by the other user and also comprehend it quite easily. He won't have to put in tremendous effort to comprehend it.

Currently, many new projects have taken it upon themselves to solve this dilemma of the blockchain world. They are making it possible for different blockchain platforms to communicate among themselves, and, too, without any requirement for a third party. Removing intermediaries is one of the key principles of blockchain technology.

With blockchain interoperability, we will be one step closer to getting rid of third parties, which we know as a centralized body or party running the applications. In other words, cross-chain solutions will help us realize the true meaning of decentralization. It will give rise to decentralized applications that can communicate among themselves across multiple blockchains. Let's look at some of the leading cross-chain projects currently. 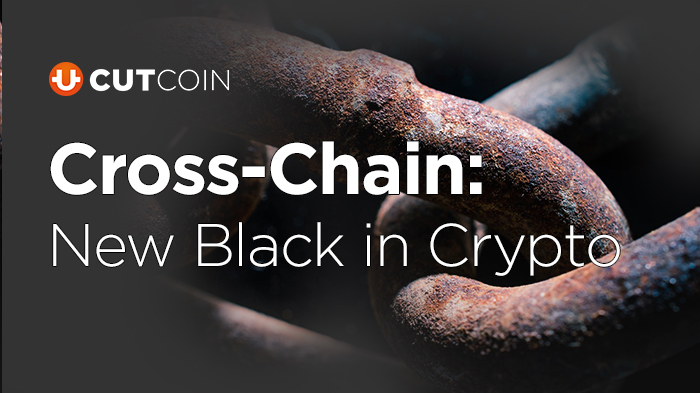 There are multiple reasons behind the increasing demand for cross-chain projects. Today, there are over 7000 cryptocurrencies across different blockchains. There are also many multi-currency wallet options available to hold & manage them. But the issue of switching between chains while accessing different protocols is still prevalent. With Cross-chain projects, there won't be such issues.


Cross-chain projects will have a deep impact on the DeFi space where no centralized entities are controlling the flow of shared data. As we said in the beginning, DeFi space has been growing at a very rapid pace since the beginning. It has crossed the threshold of $100 billion in locked value, all within 14 months. The world of DeFi applications made a journey of $1 billion to $100 billion in locked value at a breakneck speed.

But there is a significant roadblock when it comes to moving liquidity from one blockchain to another. Within the DeFi space, moving to a different blockchain, the fees for verification of user and transactions puts a dent on the user's earnings from the liquidity pool. The cross-chain functionality can remove this obstacle and let users across different blockchains transact freely without the need for a third party. It will lead to a reduction in transactional costs.

We know that cross-chain projects make frictionless interaction between various blockchain projects a reality. It also makes the flow of information between blockchain hassle-free. There are multiple benefits of it. For example, the need for third-party verification is eliminated. It also secures the shared data in a better way by preserving its integrity. Thus, only those with decryption keys would be able to access the shared information. Such a benefit will lead to further mainstream adoption of blockchain technology.

A Comparison of Top Cross-chain Projects
Polkaswitch
The increase in the growth of DeFi applications has stressed the Ethereum blockchain, which is affecting its performance now. Thus, Polkaswitch aims to leverage purpose-built blockchain like Polkadot to aid decentralized applications to improve the speed of transactions and reduce costs. With Polkaswitch, anyone using Metamask can exchange Ethereum, Polkadot, and ERC20 assets from a single interface.
By building a cross-chain bridge between Polkadot and Ethereum, Polkaswitch has opened a new page in the world of decentralized exchanges where there is no lack of liquidity, and the system does not suffer because of the congested Ethereum network. Combining the benefits of Ethereum & Polkadot, Polkaswitch offers its users access to crypto assets at the lowest fees.
To provide the best prices to its users, Polkaswitch uses smart contracts to fetch information from multiple decentralized exchanges. Their partnership with Moonbeam enables Polkaswitch to easily maintain cross-chain communication, which is a must for the smooth functioning of their system.

ThorChain
Another leading cross-chain project is Thorchain, which makes it easier for users to swap tokens across chains. Thus, users do not have to rely on wrapped or pegged tokens. It is a cross-chain platform that facilitates communication between multiple blockchains to access liquidity. So, how does ThorChain facilitate cross-chain token swap? It builds a bidirectional bridge between two blockchains for it.
Multiple technologies are powering ThorChain transactions. These are automated market maker technology making it possible to facilitate automatic token swap via smart contracts. ThorChain also uses a Tendermint-based network. It makes it possible for anyone with technical chops to build custom decentralized applications.
Another key technology that ThorChain uses is Byzantine Fault Tolerance (BFT) consensus. It enables a scenario where any failure or attack will be addressed by a specific set of people. To address the challenges of the Sybil attack, ThorChain also uses the Proof-of-Stake mechanism.


Anyswap
Similar to Polkaswitch and ThorChain, Anyswap, too, allows its users to swap tokens across multiple blockchains. Powered by Fusion's Decentralized Control Rights Management (DCRM) technology, Anyswap makes swapping tokens across chains hassle-free.
For the security of assets, Anyswap uses private key sharding. It means that the private keys are distributed across multiple nodes in bits. Thus, any transactions within the network require the signature of all the participating nodes.
Another good thing about Anyswap is that its smart contracts are open source. Thus, anyone can audit it, which makes Anyswap more secure. As for the key features of Anyswap, they are distributed inter-blockchain bridge, inter-chain swaps, and programmed liquidity.


Summary
The number of DeFi users currently stands at 1.75 million, whereas the number of unique Ethereum addresses is 150 million. It shows that there is still a long way ahead. To support further growth, features like better accessibility, ease of use, and improved liquidity, interoperability, and scalability are a necessity. Thus, it is about time that cross-chain projects become a norm rather than an exception. If Cross-chain adoption picks pace, it will be a good indication for the entire crypto space. With more & more cross-chain projects launching in coming times, we will see a new age of blockchain projects.