- explained by the CUTcoin team
In early March, a Morons (White) painting by renowned street artist Banksy was publicly burned in Brooklyn. The picture was burned by a representative of the blockchain company Injective Protocol, who personally bought it for $95,000.The destroyed creation of Banksy was converted into a token, which was immediately put up for auction and sold four times more expensive — for 228.69 ETH (more than $380,000).
From February to March, 2021, the trading volume of non-fungible tokens (NFT) on the 12 largest platforms reached a record $480 million. This tremendous success of the new asset type cannot but attract the attention of the CUT team, so in this article we'll discuss why all the fuss about it.

The thing is, NFT is the title of ownership of a digital object. This object can be text, image, audio, any digital artwork, game item or character, land and real estate in the virtual world, domain name, financial instrument, fan paraphernalia, club card or regular ticket to an event. In addition to this, the ERC-988 standard allows the creation of tokens that own various combinations of the listed entities and ERC-20 tokens.

Early Development
The history of NFTs can be traced back to the emergence of Colored Coins (in 2013) and Counterparty (in 2014), which made it possible to tokenize assets on the Bitcoin blockchain. The first hype in the history of NFT was CryptoKitties. Launched in November 2017, the project makes it possible to breed cats. The user takes two NFT cats and produces from them NFT offspring of varying degrees of rarity, which he keeps or sells.
Many projects started experimenting with NFT breeding mechanics, adding other gameplay elements, like L2 games have emerged, built by third-party developers on top of CryptoKitties. The idea of such games is that NFTs are not created for the game, but games are created for existing tokens. This idea is being developed by the Enjin project, which raised 75,000 ETH via ICO at the end of 2017, and Eminence from Andre Cronier, the founder of the prominent DeFi protocol Yearn Finance. 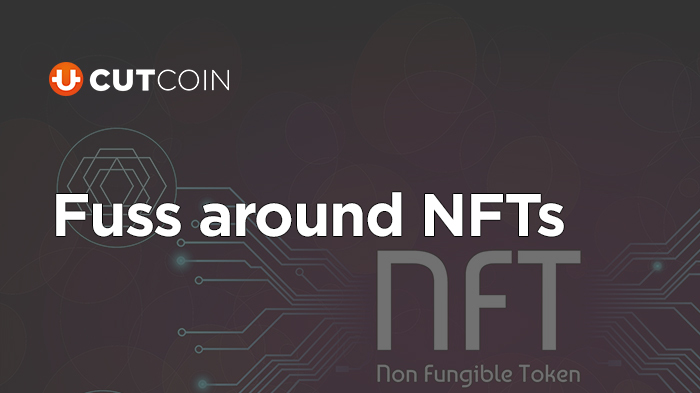 The Ecosystem of NFTs
NFT projects are developed mainly in the Ethereum network, as well as on the basis of second-level solutions and sidechains.
Release platforms and marketplaces can be categorized as follows:
The most well-known place to release and trade NFTs is OpenSea. Founded in 2017, OpenSea is a marketplace for digital goods, including collectibles, gaming items, digital art, and other digital assets that are backed by a blockchain like Ethereum.
In March, OpenSea closed a $23 million round of funding led by Andreessen Horowitz with participation from a laundry list of angels and firms including Naval Ravikant, Mark Cuban, Alexis Ohanian, Dylan Field and Linda Xie.

NFTs and DeFi
NFT is not only a tool for tokenizing digital art and various collectibles. During its short history, this technology has reached financial services, primarily decentralized ones. Over the past few months, projects have begun to emerge that work in the DeFi market and use NFTs.
One of them is yinsure.finance, created by aforementioned DeFi-evangelist Andre Cronier. It offers users the service of a tokenized insurance of their assets — for example, tokens in which loans are issued in various DeFi services.
At yearn.finance, liquidity providers act as insurers — they receive commissions from users who want to insure their assets. In this scheme, the role of the insurance policy is played by the NFT, which can be either transferred or sold to another user, or bought back.

A Way Ahead
There are three main obstacles to mass adoption of NFTs: Ethereum fees, liquidity, Wash Trading. Since the first two are quite obvious, let's discuss the third one. Wash Trading is a situation in which the seller artificially overestimates trading activity with a token, buying and selling an asset from himself. This is a fairly common phenomenon in the cryptocurrency market - for example, quite recently, the Coinbase exchange paid a fine of $6.5 million for such actions on the part of its users and even one of its own employees.
In the NFT market, this problem is exacerbated by the fact that it is extremely difficult to assess the scale of this form of fraud — the market is still too small to easily track such transactions. Nevertheless, such cases have already been recorded — for example, Nonfungible analysts noticed how the cost of characters in the games Blockchain Cuties and CryptoKitties was overstated with the help of vashtrading.
As we see it, the development of a secondary market with clear rules of the game can be the first step in solving this problem, and in general in the development of a new assets class.