CUTcoin team presents small research based on current tends.
Two Big Trends Among the Privacy Coins in 2020
It goes without saying that we are privacy advocates. Privacy and security in the cryptocurrency world is one of the most important issues. Coin developers are aware of this fact and often use these motives in their projects to promote the project. How far it has already taken us and what to expect in 2020? Here's a snapshot of privacy in crypto.

#1. Mobile-focused Development Plans
One of the most common development plans across almost all privacy coins is their plan to bring improvements in their iOS & Android application. The reason is quite easy to understand as there are 3 billion smartphone users globally.

Every privacy coin must target mobile app users worldwide as that's where they can see quick adoption and faster growth. That's what the privacy coins are doing. Dash, ZCash, and ZCoin, and many others have included improving their iOS and Android applications as one of the top agenda in the roadmap for 2020.


#2. Moving From Dandelion Protocol to Dandelion++ Protocol
Many of the leading privacy coins like Monero and ZCoin have added Dandelion++ in their development plans in 2020. It is an improved version of the initial privacy protocol known as Dandelion. Dandelion was developed for Bitcoin by a group of researchers at the University of Illinois. The Dandelion++ protocol has two phases and these are the stem phase, and the fluff phase. Both combined supposedly represent the dandelion form. 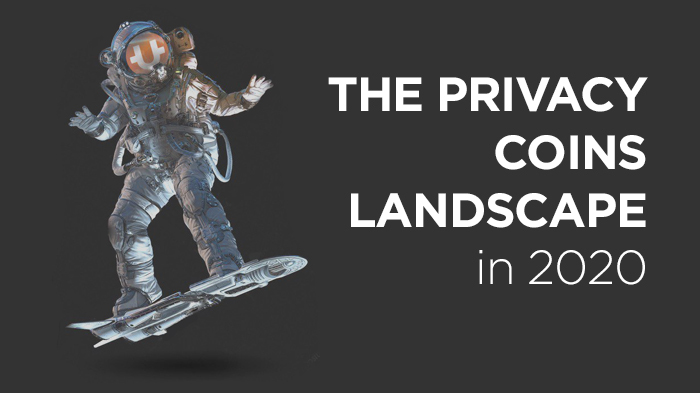 Monero has other notable plans for 2020 and these include Onion address, wallet scanning speedups, and the implementation of Triptych: logarithmic-sized linkable ring signatures with applications, concise linkable spontaneous anonymous group (CLSAG) signatures, launching Kastelo: open-source hardware wallet, and implement second-layer solutions to improve the speed and scalability of transactions.

#2. DASH
Dash has pretty exciting plans for 2020 and these plans are focused on improving both the privacy features of their coin along with the user experience.

The Dash team also updated their desktop wallet and now it sports an updated UI. It now matches with the Dash's newly updated branding. The unnecessary elements have been removed from the UI, the desktop wallet has updated color and style have also been changed as per the style guide of Dash. Dash's desktop application has also got new icons.

Some of the security-related changes that have been implemented already so far in 2020 are updating Dash with Bitcoin V0.15.2, and post-stress enhancements. The Bitcoin v0.15.2 will benefit Dash through optimization and several fixes.

The development plans by Dash for the second half of 2020 include Dash Core, which will include Bitcoin V0.16 jackpots too. Other major developments under the plans of the Dash team are the rollout of the Dash platform and DashPay.

#3. ZCash
ZCash has planned for developments in 2020 from the engineering as well as the general ecosystem point of view. In terms of engineering updates, they are working to improve their consensus known as Zebra. It has brought in best-in-class privacy to ZCash users. The ZCash team aims to make Zebra the bedrock of their engineering output now. Thus, they are implementing a new architecture for it.

Also, the team planned to come out with light wallets in 2020 as to fulfil the demands of their clients with low bandwidth and low storage. This development is specifically aimed at mobile users needs. ZCash found in its internal survey that only a few hundred of their users run a full node and hence, the light wallet was added into their roadmap of 2020.


#4. Komodo
There are three major technology lines of Komodo and these are Komodo Core, Antara Framework, and AtomicDex. The key development plans for Komodo Core includes core hardening, integration of new features, and development of its DPoW 2.0.

As for Antara Framework, they have planned to launch developer tools and enhancement of its framework. For AtomicDex, the Komodo team has planned to launch desktop and WASM applications, roll out of its full production API, and add new advanced features and integrations. All development initiatives are focused on improving security, scalability, interoperability, and decentralization.


#5. Horizen
Horizen is a privacy-focused crypto coin and they have also planned for development in 2020. However, the overwhelming majority of its focus is on the engineering side of the platform.

They have goals to develop their Sidechain beta program and by Q3-2020, they will have completed testing Sidechain Beta 2.0. Thereafter, they will officially move it to the test net. By Q4-2020, the Horizen team will add Sidechain SDK extended model 4Q in the test net.

From a privacy point of view, ZCoin is going ahead with the release of its next-generation privacy policy. They have named it after Titan God of air, Lelantus. This new protocol will allow the users to burn any number of their Zcoins and get the same number of coins back and these coins won't have any transaction history. Other privacy-related developments are focused on the direct anonymous transaction and receiver address privacy.

The ZCoin team is also going ahead with many development projects to strengthen the Znode infrastructure. These include deterministic masternodes for certainty and greater reliability, long-lived master nodes for increased security and scalability, and Chainlinks, which will provide finality about the transaction as soon as after the first transaction is confirmed.

They are also going ahead with development plans for their tokenization platform known as Elysium. It will be supported by the ZCoin's sigma protocol and Dandelion++ routing. Other plans are ZCoin Token Manager, Revamped Desktop Wallet and they are also working on providing swap capability within the wallet. Additionally, the ZCoin team is planning to offer Sigma privacy support on their iOS & Android applications.


#7. Beam
Beam is a privacy coin with lots of potentials. They have got some interesting development initiatives in the pipeline for 2020. The most interesting thing they are working on in 2020 is the web wallet and API of their atomic swap exchange. Other similar plans for 2020 include opt-in auditability in the wallet, Lelantus testnet, and wallet fiat value indicator.

Conclusion
There are 85 privacy coins today and they are combinedly worth billions of dollars. The privacy coins have seen a rapid rise due to many crypto users believe that their privacy is at stake when transacting on the blockchain. This fear has given rise to some of the most popular privacy coin projects like Monero, Dash, and many more.